Robert Kraus
Robert Kraus
Pastoral
Pastoral
The scenic beauty of the Hudson River Valley isn't its originary condition. Much of the forest in the Valley was clear cut before the beginning of the nineteenth century. The indigenous population was decimated. The area is bedeviled by depopulation, poverty and unemployment, and degraded infrastructure.

The “spatialization of power” is associated with urbanization. For Michel Foucault, the hospital is the spatial paradigm for what he calls biopolitics (the description, quantification, and management of populations), which emerged in the eighteenth century. Architecture relinquished much of its traditional symbolic authority, and participated in the development of self-regulating disciplinary spatial protocols, which include the grid (plan, elevation, and section), the Panopticon, and the type (hospitals and prisons). It played a crucial role in developing flexible organizational systems at the level of the city. Efforts to recuperate its symbolic authority in the ruin (e.g., Piranesi and the Picturesque), were unavailing.

Watershed
Pastoral places city and country in binary opposition, and ignores the territory in between. In fact, their organizational logics are coextensive.  For example, the intersection of commercial, academic, media, and military interests culminated in 1956 in passage of the Interstate Highway Act, which transformed rural communities throughout the United States.  General Motors, which lobbied for the legislation, had surpassed Ford as the world’s largest manufacturer of automobiles in the twenties by introducing “image-based marketing practices“, such as “dynamic obsolescence”, and streamlined “body styling” in which style overcame function. 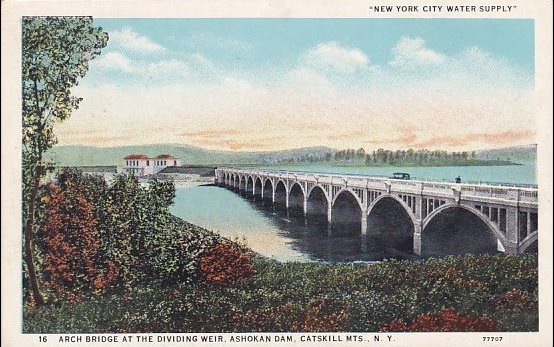 A 1935 postcard shows a man standing on the arch bridge at the dividing weir of the Ashokan dam, near his parked car, admiring a view of the Ashokan reservoir. The image announces the advent of the New York watershed as a tourist destination.

The development of the New York water supply transformed both New York City and the Hudson River Valley. Until the completion of the New Croton Aqueduct at the end of the nineteenth century, New York’s water had come from city reservoirs. New York’s burgeoning population, residential development in the suburbs, and resistance to filtering and reducing profligate consumption, led to the expansion of the water supply into the Hudson Valley and the Catskills.  Strict sanitary protocols were imposed on the work camps and watershed population. “The BWS (Board of Water Supply) fenced most work camps, installing incinerators to burn garbage and fecal matter, and thoroughly treated liquid wastes before discharging them into watercourses. Contractors agreed to supply workers and their families with clean drinking water, and to establish isolation wards to quarantine workers suspected of carrying communicable diseases.”  In 1915, the city passed legislation that “outlawed disposal of garbage, manure, and other wastes into watercourses; banned privies, stables, and similar structures from a buffer zone around streams and reservoirs; and prohibited laundry washing and swimming in the reservoirs”.

The geographic and social disruptions Upstate had corollary effects in the City. The new water system was concealed underground, along with transportation and electrical infrastructure. Redundant above-ground water resources were demolished or repurposed. The New York Public Library replaced the Croton Reservoir, signaling New York’s wealth and cultural aspirations. Robert Moses exploited BWS ownership of the water system on Long Island to create an extensive system of parks.

My engagement with both art and architecture informs my responses to my surroundings. I’ve begun a series that examines incongruity, using forms derived from found objects, including quartered logs, bricks, cattle panels, pickup trucks, maps, and plastic culverts, and diverse materials. Furniture is created by casting voids created by split logs and shattered bricks. The forms are scalable and iterable. The Enclosures reverse the logic of a series of paintings begun 30 years ago, in which implied gestures are arranged within an implied grid based on a standard 4’ by 8’ module. Their execution is serial, and indefinitely extendable.

Pastoral is mimetic; the representation of Arcadia is a salient feature. My approach to the genre is generative and allusive.